A simple green salad with a balanced dressing: lovely! 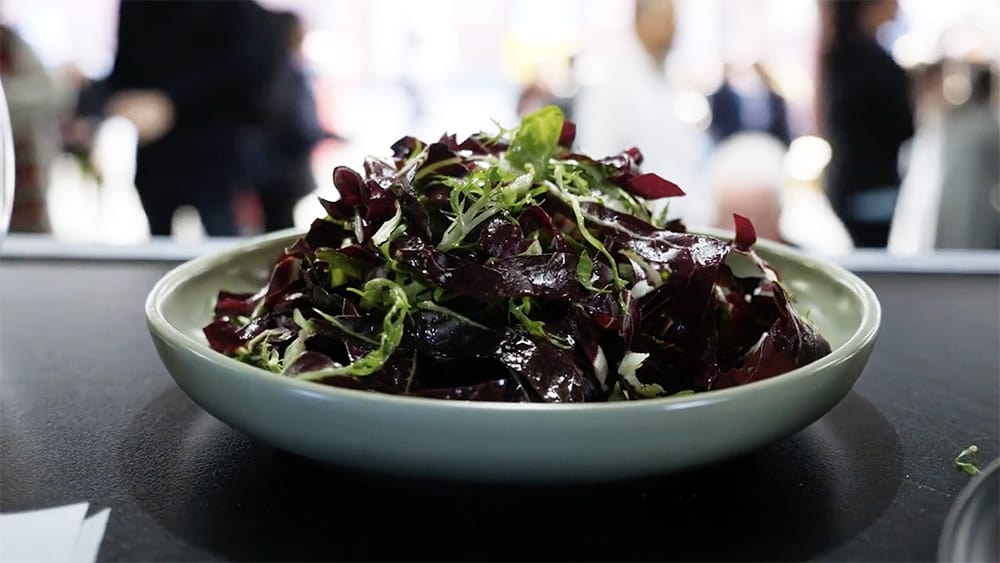 In my work as a restaurant critic, I find a green salad to be a fine marker of a restaurant’s quality and attention to detail. Perfect greens, carefully dressed and seasoned aren’t complicated but they’re easy to muck up. In my experience, when the little things – the salad, the butter, the welcome – are done well, the big things tend to follow.

I love bitter greens like rocket, radicchio and endive and I find them especially enjoyable when partnered with a balanced vinaigrette. You don’t need to use truffle in this dressing but if you have some, it’s lovely.

Are you surprised by the addition of brussels sprouts? They are really just a little cabbage and are wonderful raw.

2. Place oils, vinegar, salt and pepper in a jar. Tightly close lid and shake to form a vinaigrette. You want the dressing to be emulsified and have a creamy look.

3. Taste and adjust vinegar and seasoning, as desired.

4. Put ⅔ of the dressing in a salad bowl and add the leaves, tossing gently to combine. The leaves should be just glistening; add a little more dressing if desired.

The Inside Word on Salads from chef Damien Pignolet

Thousands of people have eaten the salads of Sydney chef Damien Pignolet, at his Sydney restaurants Claude’s and Bistro Moncur but also well before that at dinner parties he hosted in Melbourne in the 1970s. “It was around 1971 when I developed my way of making a dressing,” he says. Pignolet’s French dressing is made in the bowl that he’s going to serve the salad in.

Smash a clove of garlic with your fist and rub it around the bowl; that’s it for garlic. Add salt and pepper to the bowl.

Think about the quantity of leaves you’ll be using. “You should barely see the presence of the oil on the leaves, it’s a film at the most. So, for two people you only want one-and-a-half tablespoons of dressing,” he says.

Add a teaspoon of Dijon mustard – this helps bind the dressing.

Mix it with a whisk or a spoon and then taste it. “Touch the dressing with a teaspoon and then wipe it on across your tongue so you taste it properly,” he says.

If making ahead, put salad servers in the bottom of the bowl, the lettuce on top of the servers, then cover the salad and put it in the fridge, ready for tossing at the last minute.

This salad goes beautifully with:

And is the perfect side to my Spanish Tortilla inspired by MoVida’s Frank Camorra.