Want to nail spag bol in the Thermomix? Got you covered! 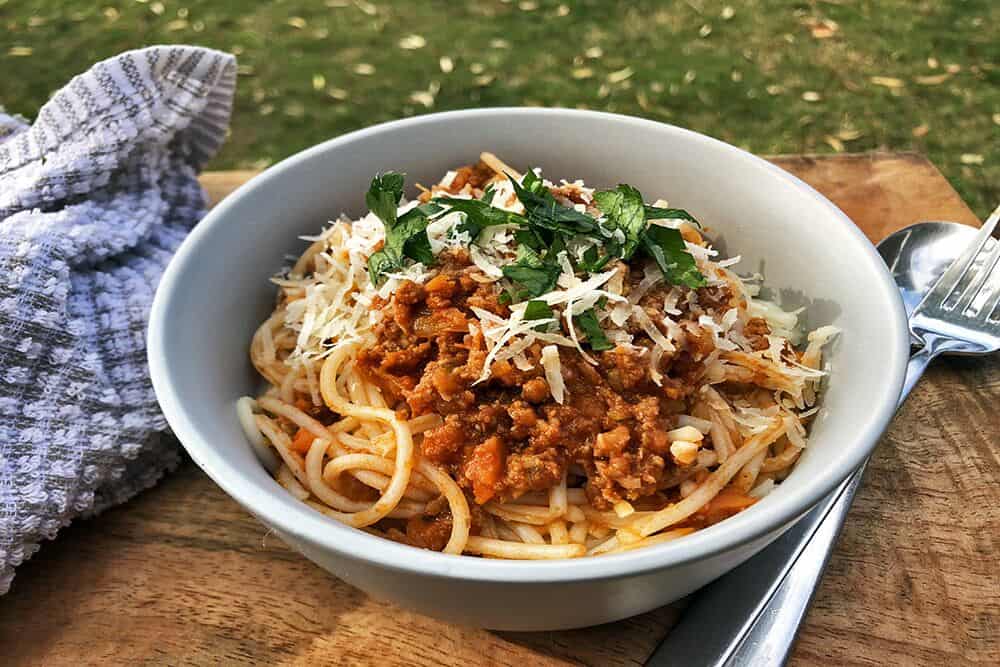 This recipe solves a bunch of problems!

One, dinner in 30 minutes. If ever I tell the family that it’s spaghetti bolognese tonight, they are so happy. I get no grumbles, only love, and that’s so nice and relaxing.

Two, crumbly mince. One of the main gripes I hear about Thermomix is about the way it cooks mince. I hate clumpy, sandy, dry mince too – you’ll never get that with this recipe.

Three, leftovers! This recipe makes about 2 litres of sauce so you’ll probably have some to keep in the freezer for emergency dinners and even lasagne.

Four, freedom! Let’s get one thing straight: this isn’t a traditional Italian recipe. In fact, there’s no such thing as spaghetti bolognese in Italy. In Bologna, they call it tagliatelle al ragu, that is flat ribbon pasta with meat sauce. You’ll get blank looks if you ask for spag bol!

Five, wine supply. Most bolognese recipes call for red wine. I know that lots of people don’t have it on hand and, if they do, may not wish to open a bottle for a splash of cooking wine. To be honest, this isn’t me! But this recipe is for ‘wine – meh’ cooks too. And wine lovers, see the variation, and pour yourself a glass while it cooks.

Six! Yes, there’s more! This nourishing spag bol is packed with veg and light on meat. It’s a great way to get extra nutrients on the dining table.

1. Place onion, garlic, carrot, celery, zucchini and mushrooms in mixing bowl. Chop 5 sec/speed 5, or until well diced. If necessary, scrape down and mix for a further 2 sec/speed 5.