I was interviewed by a Malaysian journalist who visited Australia and wrote a feature about me for the New Straits Times. As I say in the piece, food is a universal language and it’s lovely to see it connecting me to readers (and eaters!) in other countries. 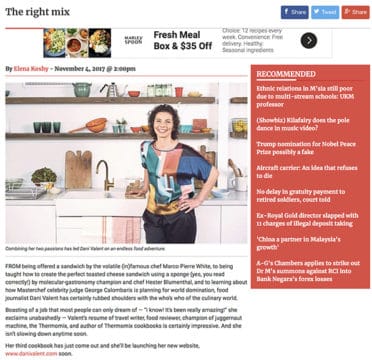 FROM being offered a sandwich by the volatile (in)famous chef Marco Pierre White, to being taught how to create the perfect toasted cheese sandwich using a sponge (yes, you read correctly!) by molecular-gastronomy champion and chef Heston Blumenthal, and to learning about how Masterchef celebrity judge George Calombaris is planning for world domination, food journalist Dani Valent has certainly rubbed shoulders with the who’s who of the culinary world.

Boasting of a job that most people can only dream of — “I know! It’s been really amazing!” she exclaims unabashedly — Valent’s resume of travel writer, food reviewer, champion of juggernaut machine, the Thermomix, and author of Thermomix cookbooks is certainly impressive. And she isn’t slowing down anytime soon.

Her third cookbook has just come out and she’s launched her new website www.danivalent.com.

Playing host at the recent Victoria Food and Beverage Trade Week in Melbourne, it isn’t hard to see her passion for food, particularly that of the Australian cafe culture and cuisine. There’s also something different, finer, and more philosophical to what she does. There’s so much more to food than just a meal, she said in her introduction at the opening of the Trade Week. “The Australian cafe culture is more about how people see themselves. It’s all about seeing life unfolding in our cafes and restaurants.”

The mother of three is more than thrilled to be a part of the food movement that’s taking Australia by storm. Her eyes light up as she talks about food and why it’s at the heart of every culture in the world. “It’s such a great way to connect people and their culture. It boils down to recognising that our attitude toward food from different cultures can feed into our attitudes about said cultures. Food is a sensory experience that can bring joy; it’s the feeling of warmth and care that come rushing back when eating a bowl of chicken soup similar to the recipe your grandmother prepared.”

Pausing, she adds: “The heart of Australia’s food culture is about connecting people back to the fresh seasonal flavours of home. and about attaching memories and stories to the food experience.” Ben Shewry’s dedication in building Australian’s unique culinary heritage has been an inspiration to Valent.

Her memories of her own experience with food go back all the way to her roots. “I grew up in a family of very good cooks hailing from different cultures, and in an atmosphere where food played an integral role. My Jewish-Hungarian paternal grandmother was always cooking, while my Anglo-Saxon mum was a great cook herself,” she recalls.

Continuing, she shares that her sister turned vegetarian when she was just 10, and that choice had a lot to do with Valent’s current love of food. “My mother had to be creative in her cooking to feed a young vegetarian, and we all benefited from her attempts to expand her horizons as a cook!”

Chuckling, she adds that one of her daughters has followed suit, and so going vegetarian is something that’s often practiced in her own household to this day. “It’s a lot more sustainable and kinder to the environment.”

A travel writer attached to the largest travel guide book publisher in the world, Lonely Planet, Valent’s other love was writing. “It’s been a thread that’s run through my whole career. Writing is an amazing vocation. I had the opportunity to go around the world doing travel guides!” she says, pointing out that it involved a lot of detailed groundwork including checking on bus time-tables, going to youth hostels and checking on hot showers and bed bugs. “Not as glamorous as people think,” she adds with a laugh. “Still, I’m definitely not complaining!”

Everything just fell into place for Valent one day when her love for food and passion for writing finally (and inevitably) collided. She recounts that her boss asked her to go to Turkey and write about Turkish food. “I immediately jumped, thinking: ‘Yes! That’s me!’” and so when Lonely Planet embarked on a series of guides to world cuisine, Valent ended up writing for it. “I loved it! Instead of walking up five flights of stairs to check for bed bugs, I was going through alleyways in search of the best yogurt or the most delicious grilled chicken!”

It all started with World Food Turkey, which ultimately led her to the endless possibilities of telling stories through food. Smiling, she confides: “I still do travel writing but I’ve definitely leant more towards food since then. I suppose it has just taken me on a lot of different paths.” 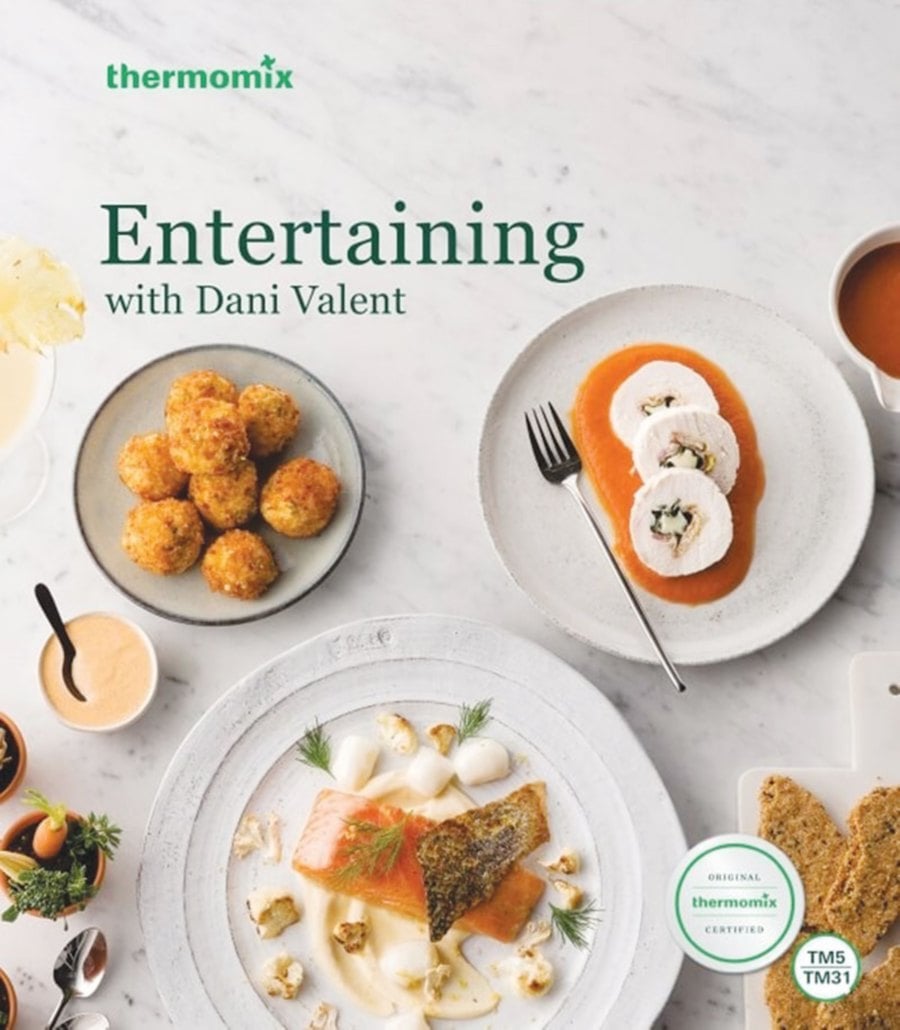 One of those paths led her to the discovery of the most advanced kitchen appliance on the market, the Thermomix. She recalls that it was her food stories that led her to the ultimate kitchen accessory. The word “Thermomix” comes from the combination of “thermo” (heating) and “mix” (mixing).

The Thermomix provides three basic functions: A heating element, a motor for fast or slow blending and stirring, and a scale that can weigh the stack of cooking pots and pans. With the ability to steam, emulsify, blend, heat, mix, mill, whip, knead, chop, weigh, grind and stir, it’s the ultimate chef’s dream to own this kitchen juggernaut.

“I was writing a story in the newspaper about chefs and their gadgets that they wanted next in their professional kitchen. They all said ‘Thermomix’”, recalls Valent.

Thermomix had taken chefs the world over by storm, attracting the likes of Gordon Ramsay and Heston Blumenthal. Not having heard of this gadget before, her curiosity led her to check out the machine, and she eventually ended up getting one. “I started developing recipes for it because I’m a lover of cookbooks. I love beautiful cookbooks for inspiration as well as a source of great recipes. There just wasn’t anything as beautiful in the Thermomix world so I ended up creating some books as well.”

Her three cookbooks feature recipes from chefs all over, including a smattering of her own. “I don’t sell the gadget and never have. I’m all about learning new tricks and recipes because I’m a keen home cook. And I love sharing my knowledge with other home cooks,” she stresses, smiling.

As someone who considers herself a foodie, are there food items she’d prefer leaving out of her list of favourites? “The durian!” answers Valent almost immediately. Grinning, she elaborates: “It’s something you definitely can’t be ambivalent about. I’ve tried it and the taste is just so intense! I appreciate it but it’s like my experience with parachuting, once is enough!”

Smiling, she adds: “I try to be open to all tastes and experiences even if it’s something that’s not necessarily the most delicious. I suppose I appreciate that connection to the story of the dish even if it’s not something I’d go for immediately.”

Citing Kiwi chef and owner of top Melbourne restaurant Attica, Ben Shewry as her inspiration, she says that his journey on exploring Australian indigenous ingredients has been nothing short of inspiring. “Australia is a nation of immigrants which makes us open to flavours from all over the world. But I think that most of us have forgotten that this country also has an ancient aboriginal culture that’s been feeding itself for tens and thousands of years.”

Her expression earnest, she continues: “Unfortunately, not much respect has been shown to that culture for the longest time. But now things are slowly changing thanks to chefs like Shewry who’s been looking at native ingredients with newfound respect and trying to figure out what they can learn from those ancient cultures.”

A quick pause and Valent concludes: “Australians should know what these things taste like. After all, it’s time we developed our very own unique food culture that’s truly representative of what this nation is all about. And as I’ve always believed, connection to your roots is one of the most important things of all.” 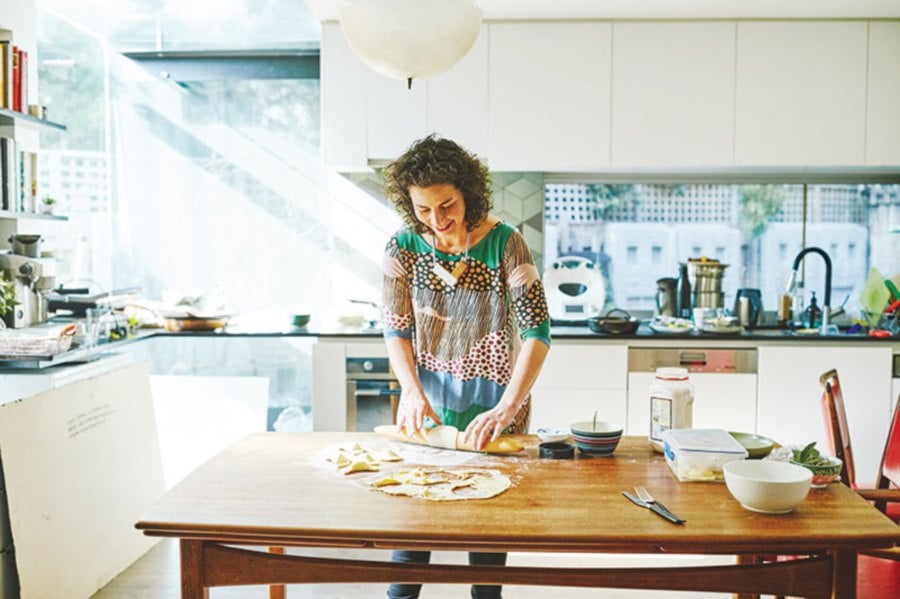 Valent calls herself a home cook who loves sharing recipes with other home cooks.

“I have to say my Thermomix. It’s a no-brainer there!”

“Olive oil. I use it to dress salads, as part of a marinade, to cook with. I like different oils from different regions. I’d like to think of myself as an olive oil connoisseur.”

“I make myself a toasted sandwich.”

“Ooh! I think salt. Pick really good salt and don’t be afraid to use it.”

When I’m invited to dinner, I always take…

“I veer between really yummy dip and a cake. At the moment, I can’t stop making a Basque cheesecake — a famous recipe from the Basque region of Spain. It contains lots of cheese, cream, sugar and eggs so it’s very indulgent. You can only manage a small slice which means you can feed 20 people with just one cake. What’s more, it’s really that good!”

When I go food shopping I…

“I look for what’s in season, well-priced and fresh.”

Everything tastes better with…