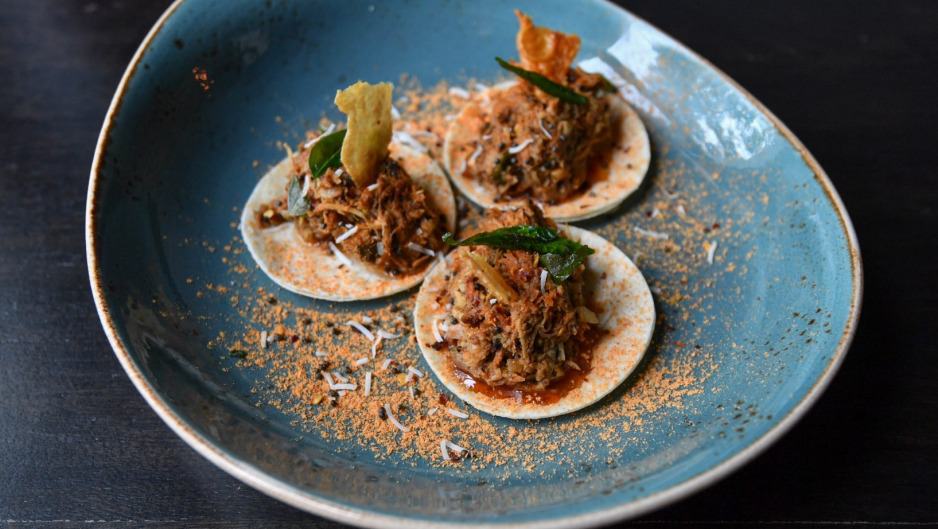 The strangest thing about Ish is that there’s butter chicken on the menu. As chef Sainyam Kapoor told me, “It’s a very un-butter chicken restaurant.”

Indeed, Ish is on a mission to reshape Melbourne’s ideas about Indian food and bust out of the curry straitjacket. So, don’t waste your time looking for tired staples such as rogan josh or tikka masala but if you must have butter chicken, it’s there as lure and appeasement.

Ish looks as much bar as restaurant, with high tables, moody lighting and a drinks list that includes Indian whisky and spiced cocktails. I heartily recommend the “Indian elixir”, a mysterious “if I tell you I have to kill you” concoction based on chai syrup.

The upstairs dining room is decked with decals outlining the Ish manifesto to wrap up tradition and innovation in a feel-good package.

Owner Ganeev Bains studied hospitality in Switzerland and Adelaide before moving back to his home city of Chandigarh to open a nightclub and restaurants. When he and his Australian wife decided to move back here, Bains wanted to bring some of the dynamism of the Indian restaurant scene with him. Ish is the happy result.

At Ish, the lentils are cooked with short-grain rice, then the mixture balled and fried to form curried arancini. The flavours – curry leaves, tamarind, mustard seeds – are all India but the presentation is European.

Short-grained arborio rice also stars in the rajma chawal risotto. A typical northern Indian after-school snack, rajma chawal is a kidney bean and lentil stew with rice. Here, the rice is cooked through the curry to turn it into a risotto redolent of ginger, garlic and fenugreek. Chef Kapoor did duty in five-star hotels: he knows risotto but this is the first time he’s melded it with the flavours of his childhood.

Sometimes the fusion is within the various cuisines of India, as with the excellent tandoori lamb cutlets with turnip puree. The combination references a goat and turnip curry from north-west India but it also ends up looking like Aussie meat ‘n’ mash. It’s clever and – crucially – tasty.

The wackiest dish is the duck taco. Duck is braised to fall-apart consistency with cumin, coriander and cinnamon, then sparked up with chilli, mustard and coconut and piled on a mini chapati (there’s your taco). It’s transporting: whether it takes the eater to Mexico, Mumbai or some delicious multicultural hinterland is perhaps immaterial.

Vegetarians are in clover. Pumpkin is tumbled with whole spices, garnished with finger lime and dressed with crisp kale in a symphony of sweet-sour flavours and soft-crisp textures that feels very Melbourne, very 2019.

Same with the tempura eggplant: it’s a deconstruction of a Hyderabadi curry with eggplant, green peppers and peanuts but it’s also a private joke. When chef Kapoor worked cruise liners, he spent every Wednesday frying eggplant.

It’s a deft and invigorating dish and, like Ish overall, a reminder that all cuisines are on the march, and that there’s so much more to Indian food than butter chicken.