I am a contributor to Good Weekend magazine’s beloved Two of Us column, in which two people talk about their relationship. In this case, it was Melbourne painter Vincent Fantauzzo (left), 41, and Sydney chef Matt Moran, 49. They met in a bar, hit it off instantly and now have a long-distance friendship based on honesty, vulnerability and a shared love of fast cars. 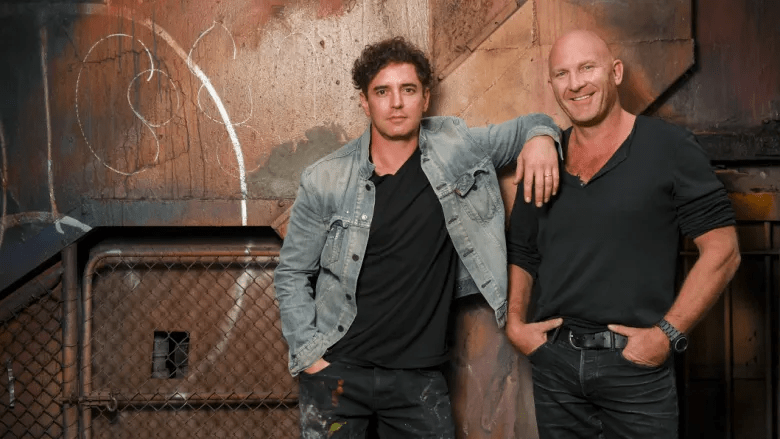 MATT: We were introduced at a bar in Sydney 10 years ago. I wasn’t that into art and had no idea who Vinnie was, but I talked to him for an hour and thought he was interesting. He said he’d love to show me the Melbourne cafes he hangs out in. That was unusual, but it was nice. Foodies love to find places no one else knows, so I gave him my number.

The next morning, there were six messages from him: “Great to meet you”; “Loved hanging out”; “Can’t wait to see you” … To be honest, I thought he might be gay. I told my wife I’d met this artist, he’d done a painting of Heath Ledger for the Archibald in 2008. She said, “Not Vincent Fantauzzo! He’s the hottest young artist in the country!”

He asked if he could come up to Sydney and hang out, paint my portrait. He was intense. He came, we had a few drinks, he took some photos. I didn’t give a shit about the painting; that was his thing, I didn’t even think about it. But there was a click. I gravitated towards him. It doesn’t happen often. It was an instant love. I’m godfather to Vinnie’s son Luca [from his marriage to his first wife, Michelle].

Vinnie is amazingly talented. When I see him paint, I think, “How do you do that?” I wonder what’s happening in his brain. I’m creative, yes – I come up with food combinations – but my brain can’t do what his does.

My life’s pretty straight and Vinnie’s is out there. Trying to ring him is a nightmare. Sometimes he’ll ask you what month it is. I’m not like that. I run a business with 2000 staff. I need to know what day it is. I’m never late and he always is. I tell him and he just laughs at me.

We both love toys – cars and motorbikes – and we’ve been in cars together on racetracks. I go fast but I’m cautious, while he’s a bit nutty, he takes risks. I tell him to slow down, pull his head in. I’m older, a big-brother figure, and I want to make sure he’s all right. Plus I don’t want my Wikipedia to read, “Killed in a car accident.”

I introduced him to his wife, [actor] Asher Keddie. Vinnie was painting a portrait every day for 30 days and he rang me in a panic, needing a subject. I rang Ash. She was going through a divorce, Vinnie was too. I said, “Asher, promise me one thing. Don’t fall in love with him.” She says, “As if!” They meet up, he paints, she sends me a selfie of the two of them. They were together from that day.

I’m proud of Vinnie; protective maybe. This year it really pissed me off when he didn’t get into the Archibald. I have a restaurant at the Art Gallery of NSW. I went to a couple of the directors and said, “What the f…? Have you seen his painting?”

We might not talk for a month, but I’d never go to Melbourne without letting him know and the same when he comes to Sydney. The more I hang around with him, the more I want to hang around with him. He’s a beautiful soul, a giving, loving guy and I would do anything for him. He’s genuine, he just likes me for me.

VINCENT: You meet some people and they feel like family. That’s Matt. I met him in a bar. I didn’t know who he was but we started talking and got on. We started texting each other; a real bromance. We were close friends very fast and it stayed that way.

When I go to his restaurants, he’s this powerhouse walking through, with everyone saying, “Yes, chef.” It’s amazing. When he’s with me, I can’t picture that. He’s a big strong guy but he’s very sensitive. He’s good to talk to. We ask each other for advice, we bounce ideas around, we trust each other. We joke, too. When I see him, he’ll ask me if I’ve put on weight, and I’ll ask him if he’s growing his hair.

Matt is one of the most ambitious people I know and that’s very inspiring. He’s a machine. He can go out all night, wake up early, go to the gym, then do some work. I don’t know where he gets the energy. It makes me think, “If he can do it, I can do it.” My mission is to do for art what chefs like Matt have done for food. If you asked a kid to name five contemporary Australian artists there’s no way they could do it, but they could easily name five chefs.

My art has had an impact on him. He’s collecting art, he opened his restaurant at the gallery. He’s always asking me to send him pictures of what I’m working on. He’s got no problem critiquing. If he asks, “Haven’t you done that before?”, maybe it’s time to try something new. It bothers me for a moment, then I listen. I can take criticism from him because he has my best interests at heart.

I painted him for the Archibald [it won the Archibald Packing Room Prize in 2011]. It’s tricky; you want to do something flattering but also revealing.

We both ride motorbikes and we like fast cars. We are very competitive. We’ve been at the Phillip Island racetrack, doing laps together. Matt drives very fast but when I’m driving he turns into an old granny, holding onto the dash: “You’re not meant to go sideways!”

I only have a handful of good friends. It’s nice to be close with a mate, give them a hug, be vulnerable and not self-conscious. I feel like I could say anything to Matt and not be judged but, equally, if I was doing something that deserved judgment, he would let me know.

He’s the first person I called when Michelle and I found out we were having Luca. I didn’t choose him as godfather because of religion, it’s because I want my son to believe he can achieve anything. Matt is generous, inspiring, a true role model and that’s why I chose him.

This article was first published in Good Weekend, December 1, 2018