Two of Us: Allan Campion and Michele Curtis – Dani Valent

Two of Us: Allan Campion and Michele Curtis

Two of Us: Allan Campion and Michele Curtis

Chefs and best-selling cookbook authors Allan Campion, 54, and Michele Curtis, 49, were in a relationship for 17 years. They separated 13 years ago but continue to co-parent and work together. Four years ago, Allan told Michele he was gay. 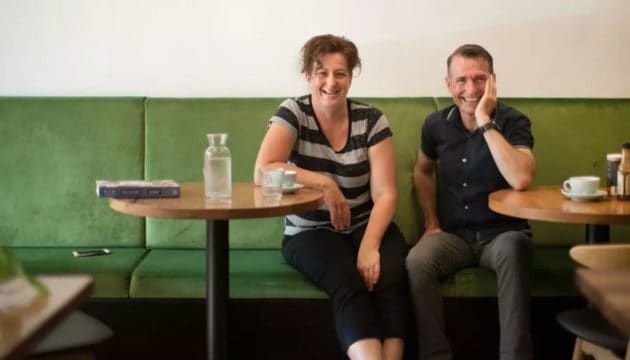 ALLAN: I met Michele 30 years ago in Turkey. We were working as chefs for the summer season and had a holiday romance. I thought she was outgoing, adventurous, a similar spirit, but at the end of the summer we went our separate ways. Then there was a reunion in London for the people who worked in Turkey. Michele came for the party and never went back.

In 1989, I wanted to come home to Australia. Michele was keen. Before we left, we drove through Europe, camping, cooking quail over vine clippings. She was willing to try anything.

We were working as chefs in Melbourne and I realised there was no information about what was in season. I compiled lists of seasonal produce and our chef friends kept asking to use them. Eventually, that turned into The Foodies’ Diary and the beginning of Michele’s and my collaboration on cookbooks, recipe columns and food guides. Michele was probably more creative with ideas, recipes and influences. I’d be more practical: we need an intro, we need an order.

The idea of having children hadn’t been a big deal, then one day Michele said, “I want to.” It felt right and bang, we had a daughter then a son. Rearing young children is full on but the work thing was always there, too. We were in each other’s pockets. Home is work, the kitchen is work, the office is just off the living room.

Michele noticed more than I that we weren’t a couple in the way we were. We talked about it, we tried. We weren’t arguing but it was probably too late. I hoped we could get back on track but not working together wasn’t possible. I admire Michele’s strength, to call it out. You can’t go back, so what do you do? You go forward.

I felt so sad for our children. We considered Mia and Luke [then 12 and 10] before we did anything: we were still a family. They would go from house to house every week. We had family dinner together every Sunday. It’s the success of my life that we could bring up Mia and Luke. Michele and I kept working together and that helped family life. You have to talk to do a project. We’ve written 35 books together.

After we split up, I had three relationships with women. Being with a woman had every feeling and emotion, everything I wanted. But it changed: that man-woman spark faded. I had to acknowledge I had feelings for men. If I’ve done anything in my life, and Michele, too, it’s to live a real life, an honest life. Still, coming out to Michele was very big. She was amazing. She always says, “If you’re happy, I’m happy for you.”

Telling Mia and Luke was a big deal. I took them for ice cream and said I had something to tell them. Mia asked if I was dying. No! I told them I was gay. Luke had lots of questions, Mia was quiet but they were incredible. It went well.

Michele and I have shared 30 years. We don’t live in the same house but we are a family. I have incredible respect for her, her resilience, her caring, her creativity. I wouldn’t wish to have shared my life with anyone else. No way. No one.

MICHELE: When I first met Allan, he had a beard and long hair. I was 20 and had grown up in Lyme Regis in the south of England. Turkey was overwhelmingly exotic and exciting. I thought, “My god, an Aussie hippie.” He was my boss but it was laid back; we just cooked, partied and played. When the season came to an end, it was, “It’s been great. See ya.” Then there was the reunion party. I wasn’t sure if I was going to go, then Allan rang. I said to my mum, “I’m going to London for a party, I’ll be back tomorrow.” I came back a week later.

When he asked me to come to Australia, I bought a one-way ticket. Everyone was excited to meet “the English girl”; it was all a bit serious but we cruised along and life was fun. I slotted in with his friends, became close to his family, cooked 10-course lunches on a camp stove in our lean-to kitchen. We wrote four books in there! It was perfect, really, for about 15 years.

But we were at home working together all day and it became all work and there wasn’t much fun anymore. We’d lie in bed and talk about work. The romance got pushed aside. The more I started to think about it, the more I thought, “This isn’t the way I want it to be.” Allan tried to talk about it but I wanted a change.

We worked hard to make sure it didn’t have a bad effect on the kids. Not long after we separated, his mum was killed in an accident, run over by a motorcycle. She was the only grandparent we had in Australia. It had a huge impact. I think we worked harder to make our family unit strong. We had to be there for each other.

It was a bit awkward when Allan decided he had feelings for men. He told me he had something to tell me. Me and the kids had joked that Allan had had about six midlife crises: he was a vegetarian, he became religious then gave it up, he gave up politics. When he told me he was feeling differently about life, I didn’t pay much attention. Then he said, “I’m attracted to men”, and I thought, “Hold on, I need to listen!” He gave me more information than I needed about how he’d been exploring his sexuality.

I wasn’t that surprised. I’d never wondered if he was gay but when we had people over for dinner, Allan would go into the garden and cut branches and arrange them in a vase. I’d be like, “Oh, Paul Bangay’s here again.” I didn’t dwell on it. When he told me, I thought it might have been an exploration but he’s had the same boyfriend for years now. I am happy he is happy; he seems happier within himself.

When anything happens in my life, good or bad, Allan is the first person I call. He is a very significant part of my life.