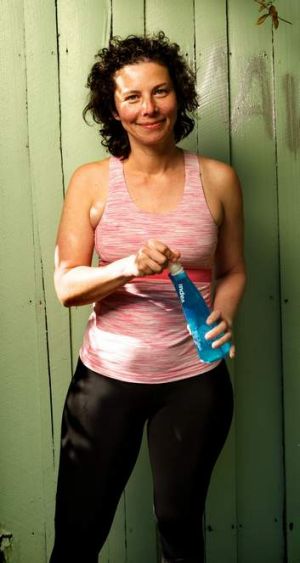 I run so I can eat but this time I ran so that others could eat a little better too. I’m a proud ambassador for FareShare, a food rescue charity that cooks for the needy.

It is a cause close to Dani Valent’s heart that will see the foodie exchange her apron for a pair of running shoes on November 17.

Valent, a food writer, will tackle the 14-kilometre The Sunday AgeCity2Sea, presented by Westpac, to raise awareness and money for Abbotsford-based charity FareShare.

The 43-year-old became an ambassador for the food-rescue group this year after learning of its campaign to fight hunger in Victoria.

FareShare is a not-for-profit community organisation that rescues food that would otherwise end up in landfill, and through the help of volunteers creates nutritious meals to give to other charities for distribution.

The organisation has recovered more than 540 tonnes of food, helped 460 charities and given away more than a million meals this year.

”A lot of people benefit from FareShare, and it’s not necessarily the homeless or those that are chronically poor, it’s often people that can’t make it to the next pay cheque,” Valent said.

The organisation has recovered more than 540 tonnes of food, helped 460 charities and given away more than a million meals this year.

”A lot of people benefit from FareShare, and it’s not necessarily the homeless or those that are chronically poor, it’s often people that can’t make it to the next pay cheque,” Valent said.

”I found this quite stark, that people that do have jobs and were often able to get food, were sometimes forced to access FareShare to put food on the table.”

Valent said she was ”not much of an athlete” until four years ago when she donned a pair of runners and began pounding the pavement.

”There’s certainly no Olympic medals in the drawer and before I started running, I didn’t really participate in any sport,” she said.

”I never thought the words ‘fun’ and ‘run’ would ever go together but, surprisingly, I learnt that they can.”

The mother-of-three will tackle the race solo but said that her family would be on the sidelines to cheer her home. ”As a restaurant critic I’d rather run more than eat less,” she said.

The food writer said she would be ”carb-loading” the night before the race and was looking forward to a big bowl of pasta. ”I’m not sure that I have any special food tips but I prefer unprocessed food and eating a variety of fresh foods,” she said.

Valent suggests that first-time fun-runners aim for a slow start.

”It’s very exciting once the starter gun goes off and it’s very easy to get swept up in everyone’s energy,” she said. ”But start slow and if you have energy left at the end, speed up then.”

Although she has participated in fun runs before, this is her first City2Sea. She said she was looking forward to the ”scenic run”, with runners starting in the CBD, making their way to Albert Park Lake before the finish line in St Kilda. Participants can also choose a five-kilometre option, an adaption of the 14-kilometre course.