I am all about the cheese! I love eating it by itself or as part of a cheese platter, I love cooking with it and adding it to salads or sandwiches, and I love the way it intersects with culture all around the world. Cheese actually helped me fall in love with the very idea of food writing. I was in Turkey working on a guide to Turkish food for travel publisher Lonely Planet. I’d worked on lots of travel guides, but this was my first foray into food. On my very first day, instead of checking train timetables, museum opening hours and youth hostels, I was in the market chatting to a cheese vendor. Before I knew it, I was hearing stories about how his ancestors herded goats over the mountains, making cheese along the way. It was a rich insight into history, family and the way food culture travels, often literally!

A dairy product that’s created by coagulating milk, or specifically the protein in milk called casein. There are thousands of types of cheese, made from all kinds of mammal milk. Cow, goat and buffalo are most common but sheep, camel, horse, yak and even deer milk are used to make cheese. In its most simple form, fresh cheese is simply the pressed curds that are formed when acid is used to split whey from whole milk. What’s left are the solid curds. This type of cheese can easily be made at home without special equipment. I show you in this video for Palak Paneer, an Indian spinach curry with ‘paneer’, a simple curd cheese. It’s really fun to make your own cheese because you get to witness an exciting transformation as a liquid turns to a solid. I love stuff like that!

What other types of cheese are there?

So many! There are two basic types of cheese, acid cheese as outlined above, and cheese that’s made using a starter culture (‘good’ bacteria) and rennet. Both of these are coagulants but different starter cultures also introduce flavours and other properties to cheeses, helping to create different varieties of cheese. Rennet is a protein that’s found in calves’ stomachs but these days synthetic rennet is common. Moulds are also introduced to some cheeses to create particular results, such as the white mould that develops on Brie or Camembert, or the blue mould that we associate with Roquefort and other blue cheeses.

Salting, brining, smoking, formation and maturation are other processes which result in different cheeses. Cheesemaking is endlessly fascinating because there is so much variety and so many variables!

How do we decide which cheese is good?

I’ve been a judge in the Australian Grand Dairy Awards on a couple of occasions. It’s a fun but rigorous process, with cheeses being separated into categories depending on type, and then judged on appearance, aroma, flavour and mouthfeel. I pride myself on being able to eat a LOT of cheese but I followed the lead of more experienced judges and didn’t swallow every morsel I tasted. That is the way to a cheese coma!

Between tastings, we cleansed our palates with green apple and lightly sparkling water. 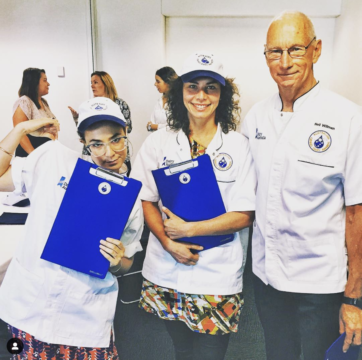 Once cheese is made, there are still possibilities for further transformation and development of its aroma, flavour and texture through the process of maturation. Cheese can be aged in a similar way to wine and appreciated for different qualities that develop with time. To learn more about this, I visited Maker & Monger at Prahran Market. Join me as I ambush cheesemonger Anthony Femia in his cheese cave to ask him a few questions.

Prior to creating the sparkling store you see above, Anthony and his team were selling cheese and epic toasties from a tiny timber cart. We hang out in the old shop for this video, in which Anthony explains how to put together a beautiful cheese platter.

So you’ve got your cheese platter sorted but what about the drinks to go with it? In this video, Anthony talks us through some lovely matches for cheese, including green tea! He kicks off by explaining how we can get the most out of tasting cheese, using a lovely select Comte (my favourite cheese!) as an example.